Ensconced in a deep valley next to the Ravi river, the town of Chamba still remains charmingly untouched by modern life – with its ancient temples, heritage homes, palaces and an amazing museum that documents the history and culture of the area.

Founded in 920 AD when Raja Sahil Varman moved his capital here from Bharmour, it remained the capital of the princely state of Chamba – and came under British control in 1846 – until it became part of India in 1947.

Driving into Chamba from the nearest rail head – Pathankot – a walk through its narrow and meandering lanes tempts one with tiny jewellery shops and small “karkhaanas” or workshops engaged in creating utensils, artefacts and statues covered with gold foil. Past the Lakshmi Narayan Temple complex created in the distinctive style of the region and further ahead – the Chamba Museum is a comprehensive and impressive documentation of the history of the state and showcases distinctive Pahari school miniature paintings, aristocratic costumes, footwear, jewellery and even a metallic coat of armour which would have been a silent witness to many wars.

The highlight of the crafts showcased is the “Chamba Rumal” – squares of fine cotton cloth – though now faded and fragile with time but yet they look like art – with figures and scenes life painstakingly embroidered with silken thread, delicately executed, rich in appearance and evocative of times gone by.

It is believed that the King used to get important subjects and happenings of the time such as the seasons, mythology, love and music – re-created in the form of paintings. The women crafted the same motifs using their needles and thread with the same effort and skill as the painters – creating the Chamba Rumal.

Originally used as decorative covers for “thalis” or platters that came bearing gifts on special occasions – the “rumals” were embroidered after scenes and figures were drawn upon fine cotton or muslin fabric by painters from the Pahari school of art.

Make this beautiful Chamba Rumal your own – Buy Here

The embroidery was then done with silk threads in soft colours; the stitches used were of the small, the ‘double darning’ kind, which appear evenly upon both sides of the fabric, achieving a double-sided or “dorukha” effect – so that both the front and the back of the rumal look more or less the same ! Occasionally, ornamentation was added through the use of flat gilt-wire with the embroidery.

There aren’t any rumals that seem to have survived – but the craft is believed to date back to the 16th century. Very few pieces bear inscriptions – with the embroiderer’s name, a date, or the name of the person to whom the rumal was to be gifted. Although the craft lost out to machine made, commercialised products – due to lack of royal patronage after Independence – it was revived by Government bodies and Craft Councils after locating its original designs from museums and collections, and women artists have since been re-trained in this craft. Also practiced in other areas of Himachal Pradesh and Jammu, this intricate yet traditional form of pictorial embroidery symbolises the essence of Pahari culture and their tradition.

Summer holiday season between April to June is the best time to visit Chamba with temperatures ranging between 35 degrees celsius to 14 degrees celsius.

The nearest airport is Kangra airport in Gaggal with flight connections from Delhi and Chandigarh. From Gaggal airport, you can hire a taxi or get into a state-run bus to reach Chamba.

The nearest rail-head is Pathankot – which is 120 kms away, from where it’s a 3 to 4 hour drive to Chamba.

For local transport in Chamba – there state transport buses available at nominal fares or local taxis for single trips or longer durations.

Chamba has a number of mid-range and budget hotels to choose from. Some AirBnB options are also available. Himachal Pradesh Tourism also operates hotels which offer decent budget accommodation.

What to see & do Lakshmi Narayan Temple

Built-in 10th century by Raja Sahil Verman, this is the oldest and the largest temple of Chamba with amazing idols of Lord Vishnu and Lord Shiva.

Built by Raja Sahil Verman in memory of his daughter Champavati it has intricate stone carvings and beautiful stone sculptures.

This palace was built by Raja Umed Singh between 1747 and 1765 and was refurbished later during the British rule. The beauty of the palace is in its architecture which reflects the tastes of the people of a bygone era.

This is one of the most iconic buildings in Chamba, built by Raja Umed Singh in the 18th century, this red colour building brings displays an amazing fusion of British and Mughal architecture.

More than a century old, the Bhuri Singh Museum displays all the artefacts dating back to the period including paintings, frescoes, carved doors, royal costumes, antique jewellery and musical instruments of the royal family.

If you have more time on your hands – explore the Church of Scotland which dates back to 1863, the 300 year old Chamunda Devi Temple. You can also trek to ManiMahesh lake believed to be the abode of Lord Shiva. Or do a day trip to Khajjiar – also called the mini Switzerland of India.

Water sports on the Ravi river, camping in the meadows, trekking and star-gazing are possibilities for outdoor lovers.

For culture lovers – there is the Suhi Mela in April and the Minjar Fair in August.

Splendor of Pahari Embroidery: Documentation of Technique and Decorative Features 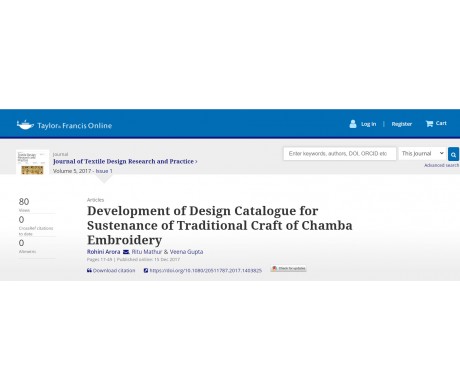