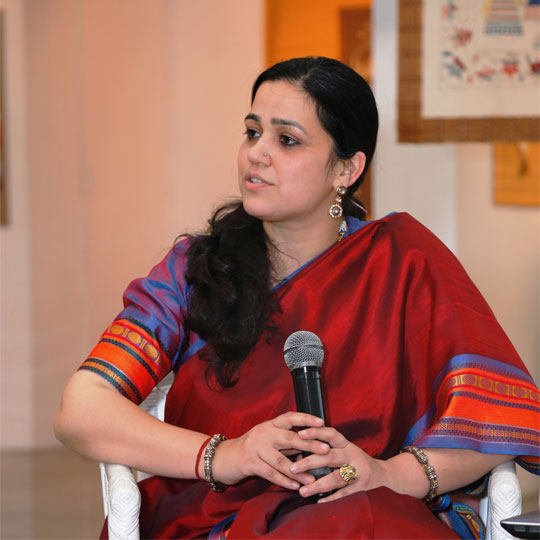 Education
I am a graduate in BSc. Home Science from Institute of Home Economics, Delhi University. I have done Masters in Home Science in Textiles and Clothing from 2001-2003 from Lady Irwin College, Delhi University. I have been Awarded ‘Dhan Khambatta Award’ 2003 for Best Student of Textile Design in M.Sc. Textile & Clothing. Soon after, the post graduation, U.G.C. NET exam was cleared in December’2005 that embarked career in teaching profession. Simultaneously, in quest to work in field of Indian Traditional Textiles, Chamba rumals have been identified as the research area. PhD was registered in 2009 in Department of Fabric and Apparel Science, Lady Irwin College, Delhi University. The topic of thesis was ‘Capacity Building of Artisans for the Sustenance of Traditional Chamba Embroidery’ under the guidance of Dr. Ritu Mathur and Dr. Veena Gupta. The degree was awarded on 29th May’2015.

Academics
I have teaching experience of seven years in some premium institutions like Guru Gobind Singh College for Women, Lady Irwin College, National Museum, NIIFT, Government College of Home Science, Mata Sundri College and others. I registered for doctoral research in 2009 and discontinue teaching to carry on Ph.D (as the pre conditions of DU for not in employment). Later after submission of Ph.D in February’ 2014, I joined Lady Irwin College for academic session August 2014- April 2015. The journey progressed by teaching in Government College of Home Science, Chandigarh and NIIFT, Mohali as guest faculty from 2015-2016. It had been a very gainful journey so far and gave clear understanding about importance of research along with academics. I am also one of the founder member and editor to TCRC (Textile and Clothing Research Center, New Delhi). I was editor of Guru Gobind Singh College for Women e journal from 2018-2020, Gyankosh: An interdisciplinary Journal. I am empanelled as designer in Textiles and Clothing with the Office of the Development Commissioner (Handicrafts) in October 2013 and December 2016.

Research
Since the pilot study for the doctoral research, I have been associated with Delhi Crafts Council from (2007 -2013) in capacity of designer and coordinator on the project on revival of Chamba Embroidery that gave direct interface with the artisans. During the doctoral research, extensive research is carried in restoring traditional technique, rebuilding dyeing procedures using indigenous dyes, development of design catalogue for access to traditional designs and motifs, recreated range of products for diversification. Along with these, intervention with artisans was taken up simultaneously for sustenance of craft. The documentation has been presented at various prestigious platforms in form of presentations and research papers in journals and books. These inputs of research and intervention with artisans were continued even after submission of doctoral research. As a consequence, a huge collection of research objects have been handcrafted through these years.

Exhibitions
These magnificent artworks once caught the attention of late Dr. Kapila Vatsyayan, Chairperson, India International Centre, and invited to display it as an exhibition ‘Rumals of Chamba: Embroidered Expressions of Pahari Women’ in 2018. The exhibition is based on explorations, revivals and innovations using diverse stitches and textures in Pahari embroidery. The exhibition was supplemented with demonstrations, workshops by artisans from Chamba and symposium for disseminating information on sustaining the rich cultural heritage of Indian textiles. The exhibition is further taken up by Indian Council for Cultural Relations (ICCR) to promote these exquisite embroidered products in major events worldwide. It has been displayed at important art centers in Serbia and Switzerland in association with respective embassies. It was displayed in exhibition gallery of National Assembly of Serbia, Belgrade. Then, exhibition rolled to next stopover to mark the commemorative celebrations of 70th Anniversary of signing of friendship treaty between India and Switzerland, organized by Embassy of India in Berne during 17-22nd December’2018. It was showcased in March 2019 in various art centers in Switzerland at Zurich (6- 8 th March), Geneva (16 Mach) and Lausanne with support of Embassy of India in Berne and ICCR.

Support service
It led to the beginning of a new phase for a complete team as it gave interface with the audiences at the wider platform. Since then, its tremendous commercial potential is realized and the core team is committed to advance it to a community outreach program. The core team of a researcher, miniature artist, embroiderers, basket maker, natural dyes specialist and weaver has worked together as a unit for all these years and continues to take the mission forward in the direction. The premium exclusive product range has found a market place at some renowned e sites such as www.rumalsofchamba.com, www.jaypore.com, www.worldartcommunity.com etc. The initiative has once again taken another lead by qualifying for the Pratibha Design Challenge in collaboration with the Ministry of Electronics and Information and NIFT.

And apart from numerous presentations and research paper this paper is most close to my heart; it was my privileged to work on stitch analysis of Ramayana temple hanging from South India, featured in ‘Nauras: The Many Arts of Deccan’ exhibition, National Museum which is presented in 2015 in symposium on ‘Art of Embroidery from South India and Preventive Care of Textile Collection’ and published in 2018 in National Museum Publication.